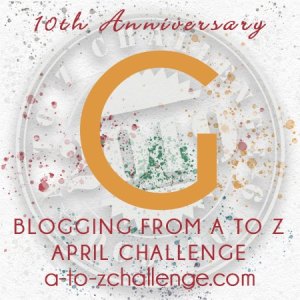 I’ve already written a post for the Letter G, but today I’m posting it again for a different reason.

Today it represents the Grief that fills my heart as I prepare to say goodbye to my beloved Kitty. She’s taking her mid-morning nap on our bed like she does everyday. She’s probably glad to be feeling better thanks to the palliative care the vet gave her two days ago. But, she has no idea that it’s temporary and that today is her last day.

She came to me 15 months ago on a cold, windy January night. As I moved about the kitchen I heard something else besides the wind. I stopped to listen. It was the unmistakable sound of meowing. Then I saw movement outside the window. With the back porch light on there was the silhouette of a cat through the window blind. She was crying frantically. When I moved to another window to get a better look, she moved along with me, jumping up to the next window. She was following me!

I managed to coax her inside and made a very quick trip to the store for food and litter. I set her up in my office, but she was skittish and hid behind a piece of furniture. I stepped out of the room and she immediately came out and headed for the food. Anytime I came back in she would dart back behind the furniture. It took three days of giving her space and speaking softly from the doorway before I could enter the room without her hiding. On the third day I got down on the floor and calling her “Miss Kitty” I encouraged her to come over to me. She walked hesitantly towards me and upon reaching where I was patting the floor, she head bumped by hand. And that was it. We were buddies.

I called the local animal shelters because I was convinced she belonged to someone. Her coat was gorgeous and she didn’t look like a scrawny stray. After two weeks of no news I gave up and happily claimed her as my own. We had already formed a close bond and I knew she trusted me.

We became fast friends and quickly developed a daily routine. I covered my bed with an old sheet so she could sleep with me. In the early mornings she’d walk on the pillow above my head and chew on my hair. I learned that this is a sign of affection. She would play on the bed with her toys or chase her tail, which provided material for hilarious videos. I would hear her downstairs meowing loudly as she approached the stairs, bringing me an “offering” of her favorite ball. But, I knew she needed to see the vet, so I scheduled an appointment after another couple of weeks.

It was there that I learned the bad news. She tested positive for feline leukemia. There is no cure and they said the life expectancy of feLV cats is low: 85% die around the three-year mark. Most people won’t adopt these cats and when they come into shelters they’re euthanized. Yes, there are exceptions and I thought by providing the best possible care in a non-stressful environment would add some years on to her life. There was no way I could end her life while she was still in good health.

I made sure she had her shots on time. Despite becoming an indoor-only cat, she got regular flea and tick protection. She ate high quality food and drank bottled water. She got her nails trimmed regularly. I set up bird feeders outside the large windows in what became Miss Kitty’s room, formerly the office. She had a ball watching the birds, squirrels, and chipmunks from her cat tree. She had balls and toys and pretty much everything she needed. Except for a cure. I was determined to do everything I could to keep her healthy for as long as possible.

I have so many happy memories of our brief time together and it gives me pleasure, yet hurts so much. What I wouldn’t give to have another five or ten more years with her. She’s a beautiful cat with a wonderful disposition and doesn’t deserve what is going to happen later today.

When I had to put down my dog of 17 years in 2000, I swore I’d never have another pet. It was just too difficult to say goodbye. It took me 18 years to take a chance on another animal, this time my sweet girl. I’m angry that we only had 15 months, but I believe she found me for a reason. She needed a loving home to live out her remaining months. I’m grateful they were with me.

It will take some time to heal from this loss. I’ll see her everywhere I look in this house. I’ll listen for her sounds 100 times each day and it’ll hurt over and over again. But, it’s the price we pay for love. And despite my broken heart, it’s worth every penny.

“The secret of change is to focus all of your energy, not on fighting the old, but on building the new.” ~Socrates