Who would’ve thought that a mundane spreadsheet I’m creating for my mom would get me thinking about life, death, and what remains when we’re gone?

Certainly not me; however, that’s exactly what happened.

But, first I have to go back to 1983. After a brief, but excruciating battle with lung cancer, my father-in-law passed away at the age of 48.

I was only 22 at the time and didn’t have much experience with death. We had just returned from the hospital grief-stricken that a strapping, six-foot-five-inch man, who “hadn’t been sick a day in his life” was gone.

I remember my mother-in-law asking me to get a sweater from her bedroom. When I stepped through the doorway something caught my eye. It was his work boots. They sat next to the bedside table quietly insignificant other than their dark color, which contrasted against the blue pastels of the room.

Then the realization struck me; these boots stood for all that was left of the man we knew and loved. They represented his legacy and the core of who he was. These well-worn, beaten Wolverines spoke to all that he accomplished over the years, including a successful construction company.

Sure, there were lots of other possessions: clothing, toiletries, sporting goods, tools, books, paperwork, memorabilia, and so much more. Years later we were still finding his belongings, tucked away in boxes and drawers.

It was then I understood how death is a great equalizer. It shows no bias or favoritism. Death doesn’t care who you are or what you’ve acquired in life. It takes our most valuable possession and leaves the rest behind.

As a young adult, I’d always felt that death was too far away to worry about. However, that jarring discovery enlightened me. With the passing decades, I’ve watched the gap between my youth and old age slowly shrink and I’m aware of it now more than ever. 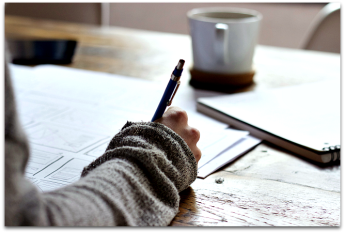 My mom has a list of phone numbers written on a lined sheet of white tablet paper. The front is covered and it continues onto the backside.

There are notations in the margins, old numbers crossed out, new ones written in, some unidentifiable smudges, and a faint coffee ring near the bottom.

It consists of family, friends, neighbors, favorite restaurants, doctors, and the skilled nursing facility that became my dad’s last home. I’m not sure how long she’s had it, but it has definitely seen better days.

I decided to type it all into a spreadsheet, sort it alphabetically, and make it easier for her to read with a larger font. As I entered each name and number I crossed it off on the paper.

Glancing down the list I noticed how her handwriting changed as it grew longer. The script slowly became shaky over time and reminded me of the notes my grandma used to write.

Suddenly, that tattered paper took on new significance. I stopped crossing out the names so I could salvage something that was uniquely hers. Instead, I started putting a check mark next to them.

The entries themselves told a warm and familiar story: Patty’s Clippers & Cuts, Dr. Jill, Plaza Pizza, D’Onofrio’s grocery delivery (Tues. & Thurs.) and Vets Fish Fry, among others. Each name and number signified a small slice from the lives of both my parents.

Then there are the intangibles; those things that can only be felt. The love, kindness, and life lessons given from the heart. The funny nicknames and the faint sound of laughter if we close our eyes and concentrate. A special song or dish at Thanksgiving; the fragrance of a certain cologne.

It’s funny what we leave behind. There’s a wealth of physical items that are easily identifiable and some that baffle the survivors.

We don’t recognize as we accumulate our stuff that it tells a small part of a larger story. These are things that are packed up for charity, passed along as mementos, or kept for the connection they provide to our loved one.

Unsuspecting things, like a handwritten list that can never be duplicated or a voicemail that relives the past, if only for a few moments.

We leave much more behind than what’s stored in the basement or in our bank accounts. We leave memories of who we are and how we lived.

What kind of memories will you leave?

“The secret of change is to focus all of your energy, not on fighting the old, but on building the new.” ~Socrates