NOTE:  I wrote this after viewing the Edge of Humanity Magazine’s post on March 6. The title is The Faces of Alzheimer’s Disease, a contribution of portrait photography by Alex ten Napel. Please take a few moments to view the images here. 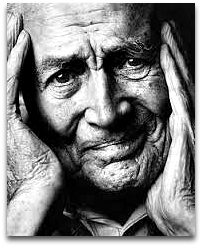 If you’ve ever spent time in an Alzheimer’s/Dementia unit then these faces should look familiar.

Not the individuals themselves, but their expressions and the moods they reflect. These faces range from thoughtful and smiling to frustrated and expressionless. They’re like the ones we all display at various times.

The difference is that ours are prompted by clear thoughts and emotions, triggered by specific circumstances. An Alzheimer’s patient often can’t account for what they’re thinking and feeling at any given moment.

The folks looking thoughtful may actually be unable to focus, their minds overrun with many simultaneous thoughts. They quietly struggle to locate memories or ideas.

Those who are smiling with amusement sometimes do so for no apparent reason. At times they’ll burst into giddy laughter as if they’re privy to some joke that no one else knows.

Then there are the angry, frustrated episodes as the patient lashes out with rage and profanity at everyone around them.

A blank stare can indicate that the person has momentarily disappeared deeper into the fog that is gradually taking over their conscious mind.

The unpredictability of these mood swings is unnerving for family and friends who are slowly watching their loved one slip away.

Alzheimer’s is a progressive, neurodegenerative disease that destroys healthy brain cells. The symptoms worsen over time and a person can suffer with it from four to eight years on average. Depending on the circumstances, life expectancy may last up to twenty years after diagnosis.

Changes in the brain begin to occur years before any symptoms present themselves. This is referred to as the “preclinical” period.

Looking back, I recall times when my dad behaved oddly or had difficulty doing a task that he’d done a hundred times before.

He took medications for high blood pressure, cholesterol, and diabetes, but we weren’t aware of the changes occurring in his brain.

I don’t know if the doctors warned him about dementia as a possible outcome of his other conditions. If they did he chose not to share that information with our family.

In the earliest stages of the disease, the person is still able to function independently. They continue their normal routines with only slight lapses of memory and minor confusion. There can be physical signs, as well. Family members may begin to notice these difficulties. A trained physician can detect problems with concentration and memory through a detailed exam. Likewise, physical exams often expose changes in gait and balance.

This is the stage that typically lasts the longest, sometimes for years. Symptoms, both mental and physical, become much more obvious and the loved one requires a greater level of care. The confusion and disorientation that begins in the middle stage influences the person’s perception of reality.

They also experience communication problems. At times they have difficulty expressing their thoughts and feelings and can’t understand what others are saying. They struggle to remember the meanings of words. This level of disorientation creates fear, anger, and embarrassment.

Patients in this stage require full-time assistance with daily activities and personal care. They have difficulty communicating and lose awareness of their surroundings. They no longer recognize familiar faces. Their physical condition worsens along with their mental state.

It’s important to become familiar with these stages so that caretakers can understand what the patient is experiencing.

Despite the ongoing challenges, there are strategies available to handle these problems. Marie Marley has authored two books and numerous articles on ways to deal with the behavioral issues of dementia patients. In the past, she has focused specifically on the very difficult job of being a caretaker.

However, after reading The Best Friends Approach to Alzheimer’s Care Marley realized that she’d never considered how the patient feels. The book, written by Virginia Bell and David Troxel, explains it in a way that the reader can experience those feelings.

In Marley’s post, she gives an example from the book that really drives this point home. The authors remind the reader of how it felt to be called on in class and not know the correct answer. Then they point out that life for an Alzheimer’s patient is living in that classroom every day and never having the correct answer.

Education is the key to understanding how the illness affects the patient both mentally and physically, and how to manage their care more effectively.

The  Alzheimer’s Association is an excellent starting point for your research. They are the leading voluntary health organization committed to caring, support, and research for Alzheimer’s/Dementia patients and their families.

Because there is no cure, Alzheimer’s eventually renders the person completely dependent and powerless.

But, knowledge is power and being able to provide compassionate and informed care is something that benefits both patient and caretaker.

It is also the best and final gift we can offer our loved one.

People often say that this or that person has not yet found himself. But the self is not something one finds, it is something one creates. ~Thomas Szasz