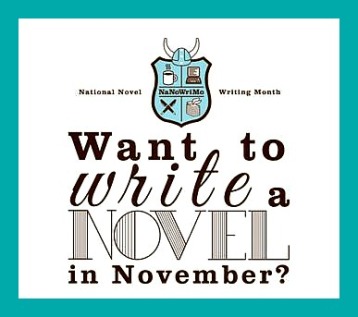 Is that even possible?

Heck, I’d be happy to write a novel in one year (maybe two!)

I’d seen this NaNoWriMo thing last November, on other blogs, but never took time to find out what it was. I had just started blogging and was busy trying to figure out what I was doing. I wasn’t up for any challenges or special projects.

But, this year I came across it again and wanted to know what NaNoWriMo stood for. As it turns out, November is NAtional NOvel WRIting MOnth. And it’s a global event, so professional and amateur writers from all over the planet are participating!

They set a lofty goal of writing 50,000 words by the end of the month. That breaks down to 1,667 words per day! The project was started in 1999 by freelancer Chris Baty with 21 participants. The following year a website dedicated to the event was launched. By 2015 the event had grown to 431,626 participants in 633 different regions on six continents.

Like most writers I’ve often put stories together in my head and created characters based on my own life experiences. And, like most writers, I’ve often wondered if  those stories are worth telling. So, I decided it was time to find out.

I don’t know if I’ll be successful in meeting the word count, but I’m going to give it a shot. At least I’ll be writing each day towards the goal of finally telling one of those stories. And that’s a success in and of itself!

I won’t be posting on my blog during November, but I’ll try to keep up with all my writing buddies here on WordPress.

If anyone else has done NaNoWriMo before and can offer some good advice, I’d appreciate it.

Take care and see you in December!