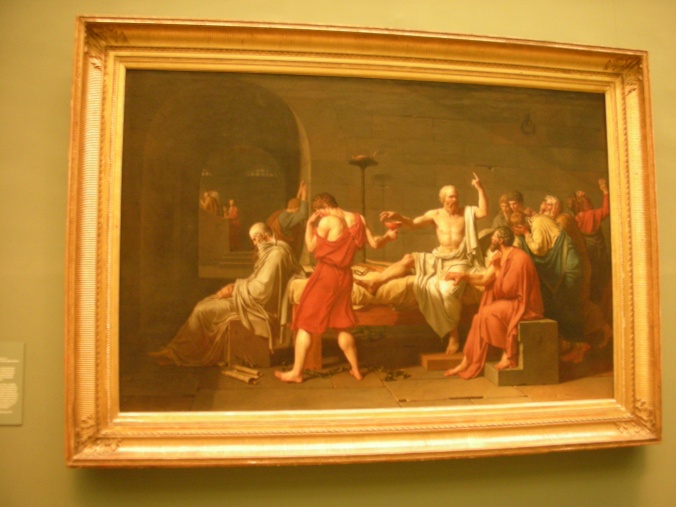 The unexamined life is not worth living. ~ Socrates

Blogging From A to Z Challenge

“D” is for Death of Socrates, as in the famous painting by Jacques Louis David.

This oil on canvas creation is on display at the Metropolitan Museum of Art in New York City. This photo I took isn’t the best, as the detail isn’t readily visible. However, a better quality picture, as well as some information about the artwork, is available by clicking on this link.

Socrates was the ancient philosopher born circa 470 BC, in Athens, Greece. He emphasized the importance of the mind over body and believed that ultimate wisdom comes from knowing oneself. He asked questions of his fellow Athenians in a dialectic method (the Socratic Method) which compelled the audience to think through a problem to a logical conclusion.

He spent most of his time going around Athens and questioning everyone from the elite class to the commoners, seeking to arrive at political and ethical truths. Because Socrates attacked the values that Athens held dear, he fell out of favor and was accused of corrupting the youth and failing to acknowledge the gods.

At trial Socrates had the chance to request an alternate punishment other than what the prosecution and jury recommended. However, his defiant tone and suggestion that he be honored for his contributions got him a death sentence that he readily accepted.

The portrait above depicts Socrates accepting the hemlock drink while gesturing and continuing a diatribe, possibly targeting the government that was prematurely ending his life. You’ve got to give the guy credit for standing up for his beliefs… all the way to the bitter end!